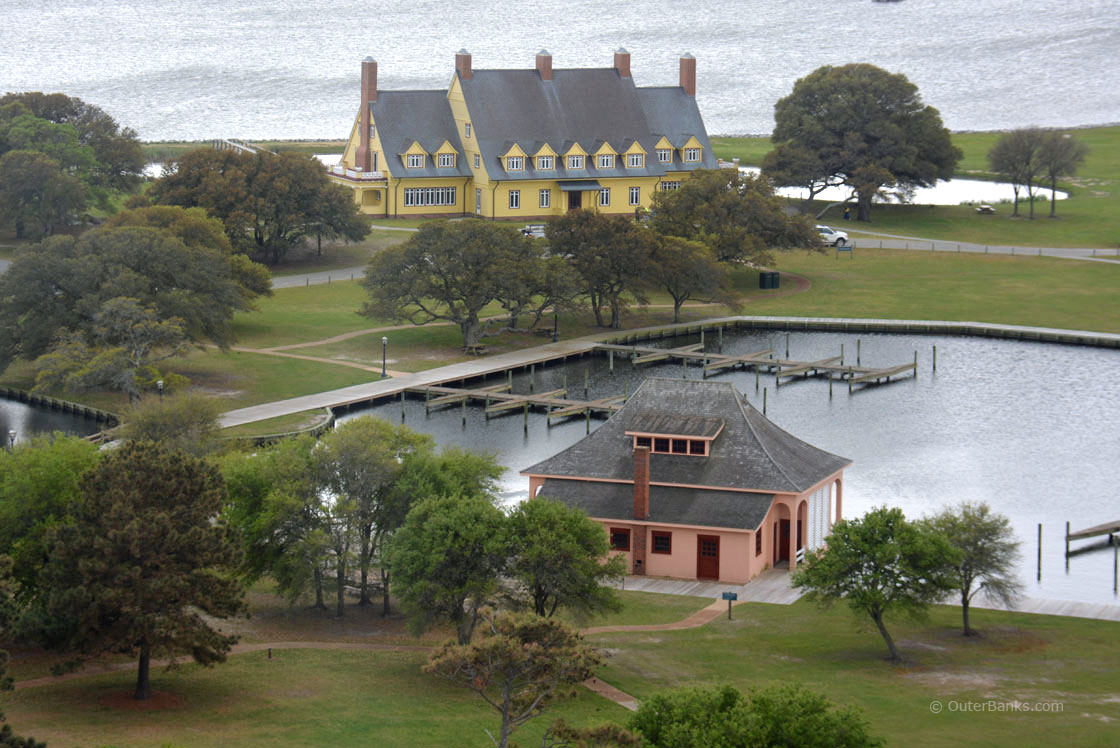 It might be hard to imagine that the Outer Banks was ever anything but a vacation destination. Frequently appearing on a number of national Best Family Beaches lists, and a regular on renowned Dr. Beach's annual list of Best American Beaches, the Outer Banks is clearly considered one of the most attractive places to vacation in the country.

But this wasn't always the case. Historically, the Outer Banks was known as a desolate place of industry, and not a family vacation locale. In the 1600s-1800s, the ports of Ocracoke Island and Portsmouth Island were busy points of commerce and trading, and from the 1700s-1900s, the islands were tapped for their lush supply of timber in a number of local maritime forests. In fact, many Outer Banks villages now exist where miles of timber were originally chopped down to be transported from Ocracoke or Hatteras to the mainland.

The first true tourists began to trickle in after the Civil War. These original visitors were adventurous hunters and sportsmen from New York City and New England who came to the Outer Banks for the exceptional wildlife and bird hunting to be had. As an essential part of the Migratory route for thousands of birds, visitors to the Outer Banks could seasonally hunt for snow geese, ducks, swans, and a number of different water fowl.

Fishermen discovered the area too, returning back home with huge puppy drum, sharks, or even marlin, and encouraging more adventurous tourists to make the trek to the Outer Banks.

The locals, who were used to making a living on the fly, took notice and started enterprises as tour guides. Soon, small food stands and shops were hastily set-up, as well as ramshackle hotels and motels.

Perhaps the area's most famous visitors were Mr. & Mrs. Edward Collings Knight Jr., wealthy New England industrialists who fell in love with the Northern Outer Banks, and eventually built the historic Whalehead in Historic Corolla. This 21,000 square foot home, constructed in 1925, was originally a private residence for the couple and their visiting friends, but it soon became one of the most prestigious hunt clubs on the East Coast, attracting wealthy visitors from all across the country. Today, the historic home now operates as a museum, and is one of Corolla's favorite attractions.

Over the decades, more wealthy visitors arrived and constructed beach homes, and the locals quickly worked to create long-term and more established hotels, shops and restaurants to accommodate the new influx of vacationers.

Today, some of these original cedar-shaked beach homes still stand, and can even be rented by modern vacationers. Nags Head's historic "Millionaires Row" is a collection of beach homes built between the 1920s and 1950s, with weather worn siding and shutters, large breezy porches, and miles of ocean views.

Those first tourists had to traverse through makeshift sand trails that meandered through the dunes, the oceanfront, and even the maritime woods, but eventually roads were installed to make navigating the Outer Banks much easier. Public Works projects in the 1930s and early 1940s helped construct a sturdy dune system to protect these new beachfront communities from the ocean, and by the time the Herbert C. Boner Bridge was completed in 1962, linking Hatteras Island to the rest of the Outer Banks, it was official: the Outer Banks had become a vacation destination.

Tourism and development increased exponentially from the 1940s to today, but many communities have taken careful efforts to ensure that overdevelopment never becomes an issue, and the Outer Banks still maintains that "desolate" feeling that attracted visitors to the area in the first place.

Large parcels of land were given to the US Park Service and the North Carolina and Federal Governments by local owners to remain undeveloped and undisturbed, and today those parcels make up a number of the Outer Banks' favorite attractions, like the reserves in Corolla and Carova, Kitty Hawk Woods, and even the Cape Hatteras National Seashore. As a result, generations of vacationers will surely come to the Outer Banks, but will always be able to enjoy that adventurous, unpopulated atmosphere that attracted the first vacationers well over a century ago.

The history of the Outer Banks is a long and storied collection of milestones, storms, famous pirates and vacationing patrons, and even a war-changing battle or two. From the first locals of 500 AD who made a happy home on these islands to the thousands of vacationers who flock to the beach year after year, the Outer Banks has always lured visitors and residents alike to explore, discover, and make history.

Vacationers to the Outer Banks have ample opportunities to learn more about the area's rich history. From taking in a show at The Lost Colony to discovering buried treasure at the Graveyard of the Atlantic Museum, the past of the Outer Banks is treasured and is always available for history buffs to explore.