There are few locales on the Outer Banks where multiple roads cross paths, and Whalebone Junction is one of the main intersections along this barrier island shoreline. The term refers to the area in South Nags Head where three major highways converge, which are US Highway 64, US Highway 158, and NC Highway 12. Both US 64 and US 158 end at this juncture, but NC Highway 12 continues south from this locale, all the way to the end of Hatteras Island, and across the Hatteras Inlet to Ocracoke and Cedar Islands. 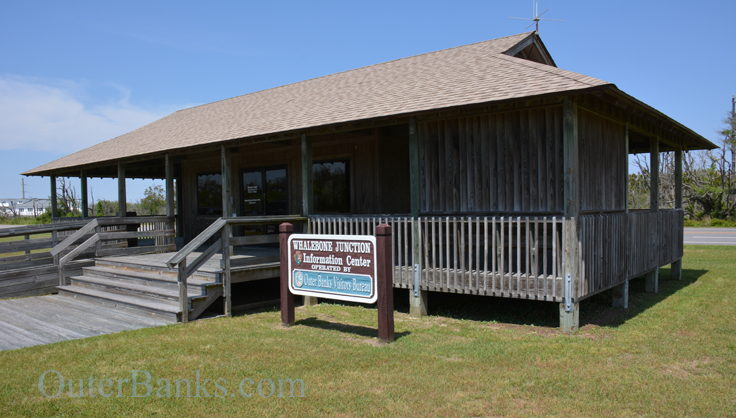 In addition to the joining of the three major roads, the region is geographically distinct, as from this point, Outer Banks visitors can head west to Roanoke Island, North to the Central Outer Banks, or south to Hatteras Island. The Cape Hatteras National Seashore also begins at this point, (as soon as travelers drive onto NC Highway 12), and a rest stop and seasonally opened Visitors Centers, appropriately named the Whalebone Junction Information Station, is located on the soundside just a hundred yards or so after NC Highway 12 begins.

The Whalebone Junction Information Station offers area information on the National Seashore and National Park Service managed attractions, like the Bodie Island and Cape Hatteras Lighthouses, and is typically open during standard business hours in the summer months. (The restroom facilities and parking area are open year-round, 24 hours a day.)

The origins of the unique Whalebone Junction moniker coincide with the first waves of Outer Banks tourism, and the first efforts by Outer Banks locals to draw more attention to their newly established businesses. Originally known as simply "The Junction," the area was relatively nondescript until a local entrepreneur found a new way to attract visitors to his Junction gas station.

In the 1930s, Alexander Midgett, owner of a local Esso filling station at the junction, discovered a dead whale that had landed on a remote shoreline along Pea Island. Midgett hauled the 72' foot long creature up the beach with the help of his Model T truck, and after a year or so, when just the skeletal framework of the Whale remained, he moved the massive collection of bones across Oregon Inlet, and north to the Junction, with the help of the local private ferry run by Toby Tillett. The bones of the whale skeleton were meticulously cleaned with lime by the Midgett family, and was placed closed to the filling station as a makeshift tourist attraction and advertisement for the gas station.

The unlikely tourism campaign worked, and soon visitors were stopping at the filling station by the junction to marvel at the collection of intact and stark white whale bones that guarded the premises. The filling station was eventually renamed the "Whale Bone Service Station," to coincide with the new roadside attraction.

The Whale Bone Service Station would eventually burn down in the 1940s, and the whale skeleton would in turn be moved, but the name for the crossroads stuck, and the site has been known as "Whalebone Junction" ever since.

Today, the Outer Banks boasts a number of surf shops, restaurants, and even roads which are named after this 1930s' era spectacle, and while the origin of the name is sometimes misunderstood or lost in translation, Whalebone Junction remains the gateway to the Outer Banks for thousands of annual Hatteras and Ocracoke Island vacationers.